Everything seems to be about cooking these days. There are that many cooking shows on TV you hardly know how to avoid them.

A blog about cooking obviously is nothing new or unique either, but this one adds a bit of a difference. 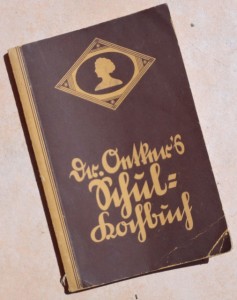 I got some very old cookbooks, one is from 1927 and it’s called ” Dr. Oetkers Schul – Kochbuch ” .. in English, you probably could have guessed it; “Dr. Oetkers School Cookbook”.  I will take a picture of it later.

I guess this book or lets call it booklet could be considered an Antique, it’s amazing that it survived the war. The other book is a German Cook book from the late 1950.

I am a bit of a sucker for German Cakes as well as a “food coach:, may I add, my dad was a Master Baker and Konditor ( Confectioner ), I used to live on cake 🙂

The concept for this blog is :

Including the mental aspect and the physical part of consuming food makes cooking Holistic.

read the next blog > Holistic Cooking in Season