The Future of Medicine

From Maintenance to Prevention and Wellness

The Future of Medicine - here already?

The Future has passed ... did anyone noticed the "tipping point"?

The day the world was rudely disrupted, and not many people noticed, or at least, didn’t pay much attention …

You may have hardly noticed, but the 19.of March 2016 was and is a date to remember.

It was the day the world changed forever, and with it, everything contained within our tiny personal universe, our planet, that little spec of something, compared to the rest of our incomprehensible large collection of universes.

What am I talking about,  yes … the day advanced technologies, or rather artificial intelligence became reality, big times.

A computer managed to win against the world champ of the ancient Chinese board game, “Go”.

This still may not sound much of a deal, but it soon becomes, if you consider that Go is probably the most complicated game ever invented. There are apparently more possible moves in a game of Go, than there are atoms in the universe. This lonely, but special day has been called a “tipping point”, the day computers not only learnt to think, but also out-smarted one extremely capable human brain.

What has that to do with the future of Medicine? Everything I would say!

By example, I am sure that the computer, fondly called “AlphaGo”, would have no problem out performing any Naturopath or Medical Practitioner.

Is that scary or just progress to a hopefully better, healthier future?

If we take time to look around a bit, and contemplate how are we trying to solve problems, we quickly noticed that most of us try to solve problems by looking back to the past. Instead of looking to the past, we may have to look into the future to overcome this profound time-lapse problem between an idea and a practical solution.
By the time, any solution has been implemented, it is already out dated.

Technology is certainly disruptive, and the only way to make use of it, is to let it happen and use it in new innovative and definitely “creative” ways to reach a new paradigm in everything we do.

Obviously medicine is a major part of that, have the governing bodies noticed that?

Our health system is seriously overwhelmed, long waiting lists, massive amount of bureaucracy, nothing seems to be streamlined to shift our society into “Prevention and therefore into a Wellness Mode”, rather than “sickness maintenance”.

Maintenance may be good for certain business structures and marketing, but not to create a healthy society.

Lets look a bit more into technology to understand those really far reaching possibilities, which could be on the strategy planning list right now.

An algorithm that learns for itself is a fundamental building block of developing AGI ( Artificial General Intelligence).

The process which can be achieve with that, will become that fast, that we lose the ability to follow it,  that’s definitely disruptive technology.

Even now, we have already 3D printing, in the future everyone will have a 3D printer at home. And we can order online and have the product printed at hour home.

This may also be feasible for medical products.

Driverless cars .. wow .. hugely disruptive on all levels, and again,  they are here already .. just imagine switching over to driverless cars, the impact of that would be enormous… for starters, there hardly would be any traffic accidents, that by itself would free up valuable hospital times and occupancy.

But it has far more reaching implication. It may be cheaper “Not to Park” a car, and let it drive back to your home, or around in circles.. or it could be used as “driver-less” taxies.

Maybe no one will own a car in the future, just dial a driverless car to take you to where you want to go.

A Trip to the hospital, get picked up by a driverless ambulance, have your blood checked by a computer on the way, while answering computer-generated questions.

By the way, Singapore is planning to have driverless taxies by 2018.

And think about it, the technology is here already….  The complication lays in the introduction of it.

But coming back to medical implication, already in healthcare, diagnostics increasingly is being computerized.

How much longer will we need a General Practitioner?

Surely there are more efficient ways to check if you need medical attention, and for everything else, you will need prevention and wellness approaches.

What does that tell you about the future in Medicine?

.. and guess what.... the future is coming that fast, it has already passed…

The Future of Medicine
under the Microscope 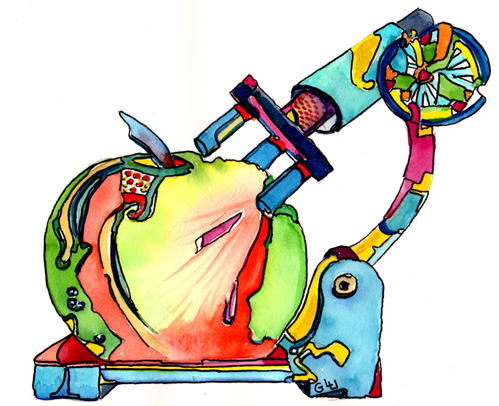