ARTICLE 6 - Chapter 2 - Criticism & Attitudes ... and how to change your Attitude

The Plural World - There are always two sides to everything. ( at least :-)

We live in a plural world where one by itself cannot exist. This is the reason why we can't be right all the time.

Everything is forever changing.

How many times have you thought that you were right, only to find out a year later that you were probably right at that time, but possibly no longer? We are all learning all the time, so each day, with more information coming in, we have to slightly change our position as to what is supposedly right or wrong.

Now, consider CRITICISM etc.
I am sure criticism can have a positive role, but how do most of us use it most of the time?

Do you know better? Are you right? Have you got all the facts?

That is the form of criticism I like to expose, the criticism where you try to prove that you are right and somebody else therefore has to be wrong.

There actually is such a position of being right and not having to prove someone else as wrong. Even in situations where there are two totally different opinions, both parties can be right.

Each one is right in their own understanding, with their facts in their particular state of mind at that very moment.

As soon as you stop yourself criticising, judging etc, you will find out something astounding: your SELF ESTEEM will rise.

If you stop criticising, you forget that other people are criticising you, and therefore you will become less SELF- CONSCIOUS!

Art is a good example, what can you criticise, the technique, the taste of subject?

How do you feel if some one talks down your painting, and how do you cope with it?

Or consider public-speaking, have you ever been in a room, looked at the speaker, then started to take him or her apart? To your surprise it was then your turn to say some words. What were you thinking on your way to the front? Do I look all right? Will I sound all right? What will that speaker think of me?
Feel that knot in your stomach closing?

All that you have dished out now comes back to you.

This is the time to remember the golden rule:

"DO UNTO OTHERS AS YOU WOULD HAVE THEM DO UNTO YOU".

There are, as far as I know, only two practical ways to get out of such a destructive thought pattern.

The first one is simply not to do it, and he second one is to STATE THE FACT, always come back to the fact.

What's the fact-jack? For example, instead of saying to yourself "that speaker wears a stupid tie," you simply state the fact that he is wearing a tie.

He obviously likes his tie, or he wouldn't wear it. You don't have to like it.

If you criticise the context of his speech, state the fact, and remember whatever he is saying is right for him (at this very moment). If you believe you have more current information or more facts, you may want to present those facts to him without making him wrong.

If you are eacting in any other way, you will become a victim, as you would carry hostile thoughts around with you for probably a long time.

Another example: a motorist is cutting you off as you are driving peacefully along (never making any mistakes yourself, of course).

Your first reaction may be "stupid idiot, where did he get his licence?" Again, this makes you the victim, because that other person is long gone, probably not even aware of any wrongdoing, while you stew in your own juice getting angrier by the minute, failing to understand how such ruthless drivers are allowed on the road.

Talking "mean" to yourself brings you just deeper and deeper into your victim position and maybe even closer to your first heart attack.

To change your victim position, you have to become aware of what you are doing to yourself. Once you notice yourself reacting as in the above example, use the: "what is the fact jack?" routine. You state the fact: "that car has just cut me off". That's it. Nothing else has happened and thank your lucky star for that. Everything else happened only in your mind.

Let us continue with a whole list of victim positions. With each victim position stated, you can evaluate which ones you can put your name against. Having recognised your victim positions, write them down for safe-keeping, as we will come back to them later.

Frustration, loneliness, rejection or feeling rejected, hurt, anger, sadness, guilt, greed, being ignored, sickness, poverty, never can make enough, never lucky, feeling trapped, pain, covering up, ignorance, boredom, feeling lost, silently suffering, distrust, yes but, feeling offended, feeling ashamed, feeling defensive, justifying, denial, lies, feeling picked on, why me and being sucked into common social media, without careful questioning their motivation or marketing goals?
And generally.. All BELIEF SYSTEMS that go along with the idea that "I CAN'T CHANGE."
All emotion, feelings mistakes without learning experiences.
Statements such as: I CAN'T, I TRY, I SHOULD or SHOULDN'T, and many, many more!!

I am sure there are many more; please add some of your own.
Now let's have a close look at some of those, and examine them further.

Which one of the following statements is the most powerful?

If you wrote down, "I can't" you may like to change your attitude.
I believe we can do everything we put our minds to. If it seems impossible, it just means that at the present time we may not possess certain knowledge or capabilities.
For example, if we had stayed with the belief that man can't fly, we never would have taken off into the air. Thank God, there are always people with strong positive visions who overcome the negative state of "I can't," otherwise we would be still living in caves.
Are you one of those strong positive persons?
As you may have guessed by now "I can't" is not the most powerful statement.
Quite to the contrary, it is a COP OUT!

Let's have a look at, "I try," and if you were of the belief that it is positive to "try very hard," forget about it. "Try" is a another cop out.

In effect, "try" is the best excuse for not achieving anything.

From now on, whenever you are tempted to say "I will try," replace it with "I will do it."

Finally we come to the powerful statement of, "I won't." This is powerful, not an excuse, simply powerful. At most times when you say "I can't," what you really mean is, "I will not."

So please, in future, instead of saying I can't, simply say, 'I won't."

(Going back a bit; you will remember the section that says nothing is right or wrong.

This needs one more explanation: In order to communicate we need to agree on something. Whatever we agree upon is RIGHT for that moment).

Becoming aware of a victim position does not mean that you are wrong. Quite the opposite, you simply learn something. It actually comes to the crunch when you don't learn anything, as that makes you a real victim. In other words, knowing of a victim position and not doing anything about it makes you a real victim, and deep inside yourself you will know that you are wrong. Why wrong?

Because you know you could change but you are afraid to. You therefore limit yourself, and do not rise up to life's many challenges. It possibly shouldn't be called wrong either, but more like being in a state of limbo or having walking death syndrome.

Being aware of the victim principle means, you can't have an excuse any more. You can't pretend ignorance any more, you know your victim position, and you also know that you are responsible for your own changes.

So, how can you change from being in a victim position?
You change by changing you attitude.

HOW TO CHANGE YOUR ATTITUDE..
Rule 1: You have to be willing to change!!
Rule 2: If whatever you are doing is not working, do something else.
Anything, just do something else!
This may just sound too simple, but often, the simplest things in life are the best.

The principle is:
ANY ACTION HAS A REACTION. - (cause and effect)
Therefore there will be always a different reaction if you change an action. A small change made at this second will turn out to be a huge change at the end. And whatever you have done, or however you have reacted in the past, it has never been a mistake, as long as you learned your lessons.

Which brings us to the next subject - MISTAKES 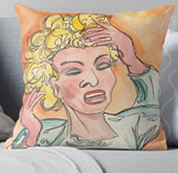 Too much critic Pillow