for health and lifestyle

Utopia Strategies for health and lifestyle

Utopia Strategies for health and lifestyle

Published Articles in support of a holistic natural lifestyle

For starters, Utopia is a vaguely described term, and would mean different things to different people.

The negative aspect is the seemingly impossible nature of the Utopia promise, and therefore the naivety of it, just too far removed from reality.

But, what is REALITY anyhow, and is it better than Utopia, and which one should we strive for?

My reality, living in comfortable surroundings is certainly closer to Utopia, than someone living in a war zone.

Utopia can be seen as a goal and road map for the evolution of mankind, rather than a ‘real’ state of living at this point of time.

The Utopia concept, to be an aspired Goal, and liked and accepted by all would need to be carefully developed, before it ever could become an inspired lifestyle.

Utopia and the concept of a Universal Value work hand in hand.

A Universal Value is a widely accepted truth. A value not accepted by half the global population can’t be called a truth, and can’t be called Universal.
This discrepancy, the concept of global agreement to one or many so called truths seems to be an insurmountable stumbling block; but I wonder, as long as there is hope, mixed with anticipation and constructive action, a positive outcome may still be possible.

Lets have a look at definitions of Utopia:

“Utopia is an ideally perfect place, especially in its social, political, and moral aspects.”
That sounds desirable to me, even so, it doesn't explain what a perfect place would be, and that’s what needs to be defined first.
Utopia is also described as “impractical, and an idealistic scheme for social and political reform”. - Think about it, what is the alternative; is it our present Reality?

Would anyone argue that war, unrest, unemployment, devastation, poverty is more practical, or desirable than a utopia concept?

In my philosophy, Utopia is well worth a second look, particularly with a specific workable definition and a feasible outcome.

Utopia will never work if anyone, any group, any political party or ideology insists to know the truth, and insisting that everyone else has to adapt that truth.

I love the quote by Bertrand Russell, the British Philosopher;
“I would never die for my beliefs … because I might be wrong.”

Beliefs only ever can be accepted as truth, if they are accepted by universal agreement.

In Utopia, you are obviously permitted to have your own beliefs, however, non-violence has to become the accepted universal value first.

One can’t have an argument about a Belief; one can have a discussion about it, and compare notes, however one needs to recognize that a Belief is not a fact.

I do certainly have my own beliefs, however basic it may be; I honour fellow human beings and our planet and the universe, and I like to believe that there is something greater than us, which I may describe as a God with undefined wisdom, far to comprehensive to ever to be understood with my intelligence. - Therefore, I hope, a God like entity will forgive my shortcomings and will further forgive my inability to “know” the only right Belief.

I do no harm, and I mean no harm, and my foremost belief is; as corny as it may sound, “all we need is love”.

For Utopia to be possible, people have to do no harm to others, be tolerant and accepting of what other people believe and aspire to.

It is the non-aggressive, non-violent attitude which will support humankind.

Utopia, to be functioning, will have Universal accepted Values.

Here is an example of a 'Universal Value', probably one already accepted by most;
“ No killing of fellow human beings”.
I think this is globally, universally accepted, however, can it be accepted as a Truth?
Probably not, as there are still too many people and countries believing that killing is right.
To be made into an universal truth, most or all have to agree. Truth, only ever can be arrived  at by total agreement.
By law, killing is illegal. However, if the killer gets the death sentence, that law makes no sense.
If we do all agree to stop killing each other, we probably will have reached the goal of Utopia already.

Sound easy doesn’t it? What stops us?

Obviously that brings up a huge dilemma, what to do if you, or a country is attacked? That dilemma can only ever be solved by accepting a huge learning curve, and getting immersed into the next wave of human evolution.

That human evolution, is the understanding that war is obsolete, totally useless and has never solved any problems, but has only ever caused immense hardship and destruction, never any winners, only losers.

As more countries accept that war is obsolete; too costly, material and human wise, and if those countries solve ideological, political, land or other disputes in a more human way, as faster we will reach a more harmonious, peaceful lifestyle.

" I absolutely would love to see, that some countries, which have neighbourhood disputes, would simply take the high ground, and dissolve the problem by ending a dispute, giving up land claims or handing back Sovereignty."

Just imagine what reaction that would create. That country would be applauded, and nominated for the Peace Noble Price. And, just imagine the money saved of not having disputes and wars, finally people could live in peace.

Yes, that sounds like Utopia, but it is feasible.

It would be a political evolution, and political systems may be seen in a new and constructive way.

There seems to be a huge gap between Capitalism and Socialism that always puzzled me.

If Capitalism were just about accumulating capital and power, than it would be devoid of all human evolution, love and compassion.

If however capitalism takes a long-term view, it must recognize that it can’t survive on “poor people”.

Poor people have no money to spend on products.

As larger the gap between the haves and the not haves becomes, as less functional capitalism becomes.

If however, capitalism recognizes that their system only will survive by lifting people out of poverty, then they will take on ideas and strategies to do just that.

The result will be; no poverty, everyone has money to spend, keeping the capital system going, which now has become a social-capitalistic reform, yes, politically bringing capitalism and socialism on one footing.

What are the building blocks of a Universal Utopia?

It starts with attitude, as long as people carry defensive, aggressive, blaming type of attitudes, it will be hard to move forward.

.. and I have to mention Religion …. as long as religion is concerned about which one is the right one, religion will cause more problems than it will solve.

Naturopathy under
the Microscope 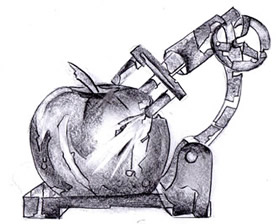